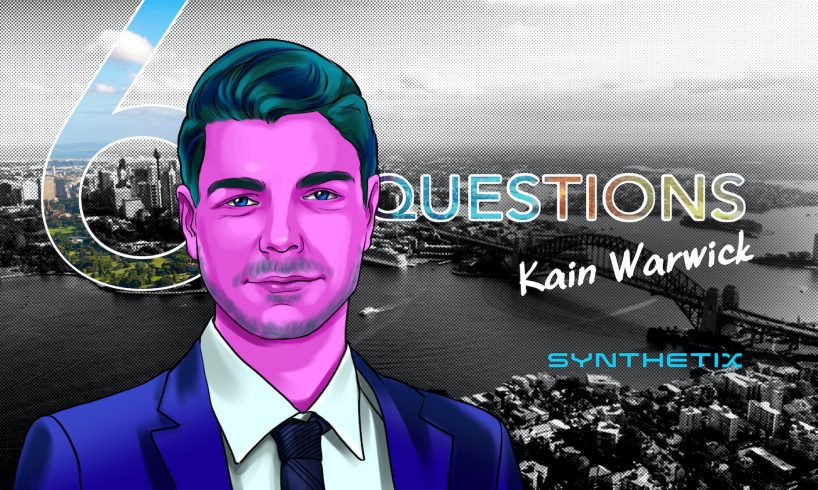 We ask the buidlers in the blockchain and cryptocurrency sector for their thoughts on the industry… and we throw in a few random zingers to keep them on their toes!

This week, our 6 Questions go to Kain Warwick, the founder of Synthetix.

1 — What’s a problem you think blockchain has a chance to solve but that hasn’t been attempted yet?

I might just still be a 2017 idiot here, but I still feel equity settlement, having a decentralized ledger for equity settlement, is a sensible thing that will happen. But it can’t happen until regulators are comfortable with it happening, etc. The efficiencies it will add are just too obvious to be avoided. There are certain things that come with that, that mean it’s gonna take a while before we see that. There have been weird little experiments, but I think a large-scale transition to something like that is still a ways away. But it will be hugely impactful when it happens.

$0 Bitcoin. There is just zero chance — it’s literally impossible for Bitcoin to go to zero. There is not a market where someone would not have a buy price for every Bitcoin above zero. It’s just functionally impossible. Whatever the canonical Bitcoin is, even if it’s not the one that it is right now — that specific chain or whatever — it has a price above zero. There’s always a market for something, there’s always a buyer of last resort for something, and Bitcoin has way more buyers of last resort — it’s never going to zero.

3 — What should we be teaching our kids?

I think we should teach our children to not blindly accept authority, which is a hard thing to do because there are so many things in children’s lives that are structured and controlled that they don’t have control over. And so, to teach them to be respectful of certain things while also being mindful that they should be questioned is a delicate balance to strike.

4 — What’s the silliest conspiracy theory out there… and which one makes you pause for a moment?

5 — Which people do you find most inspiring, most interesting and most fun in this space?

I feel like Andre Cronje is an easy and obvious one. You never know what the fuck he’s going to be doing. Larry Cermak’s good, Anthony Sassano is good, Mariano Conti is good, he’s always high value. Obviously, G (DegenSpartan) is always good.

6 — What talent do you lack and wish you had? How would you use it if you had it?

I lack the talent to draw things, and I would be starting my own NFT project if I had the ability to draw.

About the Author: postmaster