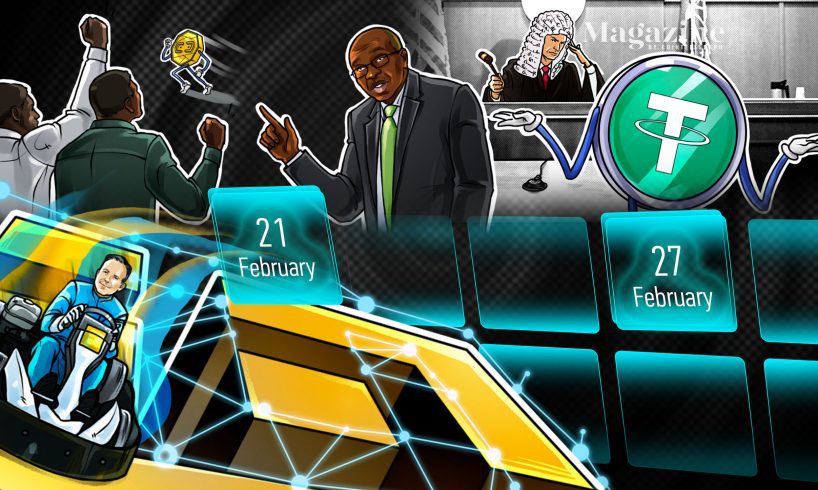 Coming every Saturday, Hodler’s Digest will help you track every single important news story that happened this week. The best (and worst) quotes, adoption and regulation highlights, leading coins, predictions and much more — a week on Cointelegraph in one link.

Bitcoin has had an exceptionally trying week, and it doesn’t bode well for March — a month that’s traditionally bearish for the world’s biggest cryptocurrency.

After hitting record highs of $58,300 last Sunday, Bitcoin suffered a dramatic reversal of fortunes — crashing to $46,000 on Tuesday. Elon Musk might not have helped matters… in the run-up to the correction, he had tweeted that BTC and ETH seemed high.

Analysts and investors alike breathed a sigh of relief on Wednesday when Bitcoin managed to retake $50,000 — with some proclaiming that the asset had undergone a “healthy correction.” But this narrative proved shaky when BTC plunged yet again on Friday to lows of $44,454.84.

All of this comes amid a backdrop of unease in the traditional markets, and this week’s price activity suggests BTC faces an uphill struggle if it’s going to appreciate further. Generally, analysts are looking for $50,000 to become an established support before expecting any bullish continuation.

MicroStrategy purchases another $1 billion worth of Bitcoin, now owns 90,000 BTC

A flurry of good news throughout the week may have prevented things from going bad to worse for Bitcoin. Early in the week, two institutions announced they were doubling down on their BTC buy-ins.

MicroStrategy purchased an additional 19,452 coins, with CEO Michael Saylor declaring that his company has no intention of slowing down. It came after Square announced it had purchased 3,318 BTC for $170 million — following on from a $50-million spending spree in October 2020.

Bitfinex and Tether also announced that they had reached a settlement with the New York attorney general, linked to ongoing allegations that Tether misrepresented the degree to which USDT stablecoins were backed by fiat collateral. Under the terms of the deal, both companies will have to pay $18.5 million in damages, report on their reserves periodically, and stop serving customers in the state.

On Friday, JPMorgan helped to cheer up the markets by telling clients that allocating 1% of a portfolio to Bitcoin would serve as a hedge against fluctuations in stocks, bonds and commodities.

Moving beyond Bitcoin, there’s been a lot of movement in the altcoin markets.

Last week, Binance Coin had stolen the show with a stunning triple-digit surge that helped it become the world’s No. 3 cryptocurrency. Fast forward to this week, and it’s now been overtaken by Cardano’s ADA.

A fresh wave of optimism and buying volume on Friday pushed its price to a new all-time high, and momentum for the project has been building throughout February. Open interest for ADA futures also rose to $580 million, surpassing Litecoin to become the third-largest derivatives market.

Despite NFTs entering into a bull market — with a report suggesting that they’ll explode in popularity even more as 2021 continues — it’s definitely been a week to forget for Ether. After touching new all-time highs of $2,000 last weekend, ETH has tumbled by more than 26% this week… taking it below $1,500 at times.

All of this comes as an exodus from the Ethereum blockchain continues, with 1inch becoming the latest DeFi project to expand to Binance Smart Chain.

As the old saying goes: “The sun don’t shine on the same dog’s ass every day.”

The sun was certainly shining on Elon Musk when the week began. One analyst had suggested that Tesla had made $1 billion in profit since making its Bitcoin investment. That’s more than the profit generated by selling electric vehicles (what it’s known for) across the whole of 2020.

Alas, that was before the carnage seen on the crypto markets. To make matters worse, Tesla’s share price has dropped by more than 20% from the highs of $890 seen on Jan. 26. These joint factors prompted Musk to lose his crown as the world’s richest man. Some analysts wasted little time in attributing TSLA’s crash to its association with Bitcoin.

But there’s another threat on the horizon, with reports suggesting that the U.S. Securities and Exchange Commission could investigate Musk’s alleged impact on BTC and DOGE through his many, many tweets.

The billionaire made a concerted effort to shrug off these concerns, suggesting he would even welcome such a probe.

Coinbase has held Bitcoin on its balance sheets since 2012

We’ve been learning a lot more about Coinbase this week as it gears up to launch on the stock market. One particular hipster-ish announcement came when the exchange declared that it’s held Bitcoin and other cryptos on its balance sheet for nine years.

Coinbase sought to package this announcement as a paean to other corporations that might be considering a similar move — touting itself as an authority in advising institutions about how to deal with their own prospective investments.

In other news, the company submitted its S-1 report to the Securities and Exchange Commission this week. The filing revealed that the exchange generated revenues of $1.1 billion in 2020 — 96% of which came from transaction fees. Net income in 2020 came in at $327 million… a stark contrast to the $46 million loss seen the year before.

For more info on crypto prices, make sure to read Cointelegraph’s market analysis.

“As gas price stays too high, we see a lot of projects, tokens and users coming to BSC, and this is the right moment for 1inch to expand to other blockchains.”

“Since our founding in 2012, Coinbase has held bitcoin and other crypto assets on our balance sheet — and we plan to maintain an investment in crypto assets as we believe strongly in the long-term potential of the cryptoeconomy.”

“Incredible scale for a technology that critics claimed couldn’t scale.”

“It’s very rare to see pre-GPU era bitcoins move, it only happened dozens of times in the past few years. And no, it’s probably not Satoshi.”

“The company now holds over 90,000 bitcoins, reaffirming our belief that bitcoin, as the world’s most widely-adopted cryptocurrency, can serve as a dependable store of value.”

“We are now sitting on 2.35x the previous cycle ATH OF 20k. WE ARE JUST GETTING STARTED.”

“Square believes that cryptocurrency is an instrument of economic empowerment, providing a way for individuals to participate in a global monetary system and secure their own financial future.”

“I think you can expect that we’ll have a billion people storing their value — in essence, a savings account — on a mobile device within five years, and they’re going to want to use something like Bitcoin.”

“I do think people get drawn into these manias who may not have as much money to spare. So, I’m not bullish on Bitcoin, and my general thought would be: If you have less money than Elon, you should probably watch out.”

“But we’re now to the point where ETH 1.0 — oh, we need ETH 2.0 so soon, come on, Vitalik, get it going, man — ETH 1.0, most regular users are priced out of using the majority of applications on Ethereum.”

“I lost most of my life savings and haven’t received a response from a human. I’d think they would refund or they would lose all their customers. I’m sick to my stomach but will join the lawsuit with plenty of proof(screenshots) if not refunded.”

“In our view, many institutional investors are entering with a buy-and-hold mentality given their understanding of Bitcoin as digital gold.”

“I think Tesla is going to double down on its Bitcoin investment.”

Prediction of the Week

We love an outlandish prediction here at Hodler’s Digest… and Michael Saylor certainly delivered the goods this week.

The MicroStrategy CEO declared that Bitcoin will be the savings method of choice for a staggering 1 billion people in just five years’ time. That’s despite the fact that just 21 million BTC exist… and his company already owns 90,000 of it.

In a confident interview with CNBC, he declared that Bitcoin “is the dominant digital monetary network,” adding: “I think you can expect that we’ll have a billion people storing their value — in essence, a savings account — on a mobile device within five years, and they’re going to want to use something like Bitcoin.”

FUD of the Week

Bill Gates warns Bitcoin buyers: If you have less money than Elon Musk, watch out

Microsoft founder Bill Gates had a big warning for Bitcoin buyers this week.

Speaking to Bloomberg, he warned: “Elon has tons of money, and he’s very sophisticated so, you know, I don’t worry that his Bitcoin would randomly go up or down.”

Gates said it would be a mistake for the average investor to blindly follow the mania of optimism surrounding Musk’s market moves, telling those who aren’t billionaires to “watch out.”

Criticizing Bitcoin’s energy consumption, he added: “I do think people get drawn into these manias who may not have as much money to spare. So, I’m not bullish on Bitcoin, and my general thought would be: If you have less money than Elon, you should probably watch out.”

This isn’t to say that Gates thinks digital currencies are a bad thing. He just believes that they should be transparent, reversible and (essentially) centralized.

As you’d expect, a post-mortem is now fully underway after this week’s carnage in the crypto markets.

Curiously, data from Santiment suggests that the initial crash may have been linked to a huge transaction that took place after Sunday’s all-time high of $58,300. The transfer of 2,700 BTC — worth $156 million at the time — was the second-biggest transaction of 2021.

A prominent crypto influencer has warned that Ethereum’s competitors will continue to siphon away users should Eth2 fail to launch soon amid ever-increasing gas fees.

Lark Davis said Ethereum’s skyrocketing fees has meant that only “rich investors” can afford to use the network, prompting smaller users to switch to competitors like Binance Smart Chain.

Describing the current gas fee prices as “totally loco,” Davis urged Ethereum developers to expedite the launch of Eth2 in response to the skyrocketing to prevent a further exodus of users to cheaper alternatives.He added: “We’re now to the point where ETH 1.0 — oh, we need ETH 2.0 so soon, come on, Vitalik, get it going, man — ETH 1.0, most regular users are priced out of using the majority of applications on Ethereum. […] A transaction on Uniswap costs $50 on average these days, and that is just crazy.”

Sam Bankman-Fried: The crypto whale who wants to give billions away

He’s just 28 years old, but Sam Bankman-Fried has already amassed a $10-billion fortune. But unlike most people in crypto, he’s building up this fortune to give half of it away.

Mastercard is set to open the shop doors to crypto as a means of payment in 2021, but it will likely be a challenge for the firm.

Bitcoin’s market cap broke the $1-trillion barrier without a final push from institutions — could their influence be overrated?